THE EARONS ARE NOT THE RESIDENTS 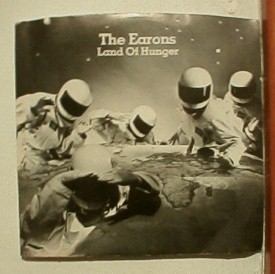 THIS I KNOW for sure.

BUT FRIZELLE is correct: I am losing my mind.

MEANWHILE: an Earon progress report from the comments.

THE ACRONYMED T.A.M.S.Y. turns up an extremely plausible theory re: the true, non-numerical identity of several of the Earons...

The good news is that the all-seeing eye of the Google has indeed unmasked the true identity of the Earons, although it took a bit of squinting. The band appears to have been based in New York — or anyway, three of its presumed members previously played with bands based there (Melvin Lee, Kevin Nance and Alonzo "Lonnie" Ferguson comprised 60% of the disco-funk band Machine; Nance also played with the eccentrically punctuated B.B.&Q. Band, a.k.a. the Brooklyn, Bronx and Queens Band). The other two members of the band appear to have been Henry Pizzicarola, who has mysteriously vanished, and Percival Prince, who is a British airplane.

THIS IS A PROMISING LEAD, yet even unmasked, these Earons remain mysterious. Where are Lee, Nance, and "Lonnie," now, and what are they wearing for head protection these days?

AND HOW DID HENRY PIZZICAROLA DISAPPEAR?

Several others, including JESSE, pointed out the allmusic.com/wikipedia standard text...

"A band whose gimmick proved more intriguing than most of their music, the Earons were a funk variation on Sun Ra's cosmic mythology approach, with a little bit of Anthony Braxton's mathematical obsession added. They claimed to come from "Earon Earth," and all the members were known only by numbers. They did have one outstanding single, the hard-hitting and musically arresting "Land of Hunger" in 1984. It deserved a better fate in R&B circles than its ultimate stalling out at number 36. Still, this was the only one of three Earons singles that even made it beyond number 50, and they soon disappeared, probably returning to "Earon Earth."

APART FROM GENERAL, BEAUTIFUL NUT-JOBBERY, what is it exactly about masked men in white jumpsuits saving blonde white people from moving tiny levers in an abandoned oil derrick that suggests the work of Anthony Braxton?

OR DOES THE AUTHOR OF THIS CITATION KNOW MORE than he/she is letting on? Does he/she have access to primary sources other than this video? And who is the author anyway.

DOES HE OR SHE HAVE A NAME? Or a number.

The internet awaits the answers.

Annie Wu said...
This comment has been removed by the author.
3:55 PM

I seem to be slightly retarded when it comes to closing tags, so I will try this again... If this fails, I give up completely and everyone will just have to deal with the ugly HTML:

has the "Land of Hunger" MP3 available for download. It's no music video, but at least the song is full-length so that it can be played on loop in the background during more intense "Earons" Googling.

Could they be related in some way to the...

Unrelated to the Earons (my indie research minions failed me), but yesterday someone commented on one of my new hobo sign photos:

"When did Hobo's[sic] become the new pirates?"

Global bindle domination is one step nearer. Can the Hobos of Lake Michigan epic be far behind?

I don't hear anything remotely Sun-Raish or Anthony-Braxtonish either, "mathematica" or elsewise (the Wikipedia entry appears to be in part a botched cut-and-paste plagiarism of Allmusic). It's a funk track. A pretty good one, with some crazy costumes.

Lazy music reviewers will often use bands whose uniqueness forms a sort of coordinate point as a shortcut to an explanation (i.e.: a quirky, discordant blues-based band will invariably be compared to Captain Beefheart). That they weren't compared to the Residents either meant the reviewer wasn't altogether lazy, or that he had not heard of them.

But they don't sound remotely like the Residents, either.

If you had to make a comparison based on sound, you'd start with maybe The Gap Band. The look? Devo, straight up.

Anonymity is a great thing. At this point of my musical journey, in order to get a record deal, what you look like and the color of your skin determines the genre that you’ll be put in. That thing we call musical category. For me, music has always been universal. The concept of The Earons was designed to listen to the music and forget whether we had long hair, green hair, “punk” hair, black or white, listen to the music, and have a good time. I will always be grateful to Chris Blackwell for taking us and giving us a chance at Island Records to explore this concept we call The Earons.

Were in a Land of Hunger, a land of waste, kinda makes you wonder about this place.

We not only hunger for food but we hunger for love and understanding here on earth.

The Earons are timeless. Now more than ever, the relevance of thier thought provoking musical transmissions should be very obvious to everyone Earon Earth.

Please visit the Earons at EARONS.Net. There are some previously unreleased songs there that you might enjoy. If you like what you see and hear then please return to the site often as it will be constantly evolving... If you're interested in contacting them you can write them at info@earons.net