TONY FAULKNER of the PORTLAND, OREGON DAWKINS-FAULKNERS reports from that fine city of bridges and neo-burlesque...

THE EMERGENCE OF AN INTRIGUING PUBLIC FIGURE

"Being as how you have a vested interest in such people holding public office, I'm pleased to introduce Steve Novick (if I'm the first Oregonian to share)."

NOVICK, according to his perfectly named website, he is a progressive with "a hard left hook."

AT THE TENDER AGE OF 14 was he sent loose upon the hard streets of Oregon after the closing of his Junior High School due to budget cuts...

(AS YOU MAY KNOW, Oregon regularly ranks very highly in US News & World Report's annual MOST DICKENSIAN STATE list)

...BUT RATHER THAN TURN TO A LIFE OF HOOK-HANDED PICKPOCKETING, he instead enrolled IN HARVARD LAW SCHOOL AT THE AGE OF 18, later acting as lead counsel in the Love Canal case.

AND WHAT'S MORE, he is the only candidate for Senate who begins his official bio with a trivia question--so you know he has my vote.

(NOTE: I CANNOT VOTE IN OREGON)

SHOULD STEVE NOVICK PREVAIL and become a US Senator, he would, under obscure Oregonian law, be but A HOOK-HAND FROM THE PRESIDENCY.

NO MATTER YOUR AFFILIATION AND POLITICAL BELIEFS, I trust you will watch his candidacy with interest.

FROM THE COMMENTS, Molly alerts that Coulton is on YOUTUBE's "FEATURED VIDEOS" list at this very moment.

WITH THIS AND HIS RECENT EXPOSURE in the Magazine of record, it is clear that my old feral man-child friend has eclipsed my own small measure of renown.

I SUPPOSE FOR THE NEXT BOOK he will just have to tour with the Geico Cavemen.

THAT IS MY FATE

This image from CT Pope was INEVITABLE

I have no idea what he's talking about re: PRETTY LITTLE POPPY. Frankly, that bit is all just spooky.

KOTTKE SENT ME THIS IMAGE ...via the incredible SHORPY

AND I AM SAYING "thank you."

LOOK FOR THE LABEL WITH THE SHIP THAT SAILS THE OCEAN

Probably the most important commercial of all time.

Is the creator of the COULTON image below.

I TRUST YOU ALL SAW AARON WILLIAMSON IN THE NEW YORK TIMES MAGAZINE?

coulton & me
Originally uploaded by HaqDiesel.
HERE IS A PHOTO OF THE MAN HIMSELF

(WITH COULTON in the foreground)

YOU MAY ALSO READ ABOUT DR. "SHAGGILY HANDSOME," as he was known at Bacon Academy, here.

AND FROM THE VERY SAME ISSUE, here is an update on Neal Pollack's DANCE FEVER.

I HOPE YOU ENJOY all this printed matter.

I AM IN THE COUNTRY WITH LIMITED ACCESS TO ELECTRONICS

h!
Originally uploaded by Ape Lad.
BUT IN THIS BRIEF MOMENT AWAY, Ape Lad once again comes through with CONTENT.

YOU CAN SEE AND CONTRIBUTE more Hs and more sunrays here.

AND A DOLLAR SHORT 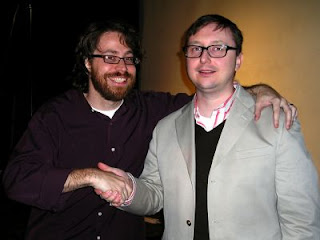 I REALIZED THIS MORNING that I missed one critical photo in my COULTON-PHYSICAL-AFFECTION-ROUNDUP of yesterday.

I DON'T RECALL who took this photo.

PLEASE REMIND ME, if you do.

JoCo and a Stuffed Weasel
Originally uploaded by pasquinade.
BUT I DOUBT it's legal

That is all
Posted by hodg-man at 7:25 PM No comments:

COULTON SWEATS FOR PAUL AND STORM

finale
Originally uploaded by cyaneyed.
AS YOU CAN PLAINLY SEE

CIMG6901
Originally uploaded by shadixpn.
TODAY, for every reason you can guess, I am only going to blogging photographs of JONATHAN COULTON MAKING LOVE.

IF YOU HAVE MORE, please share them with me. The world must know.

BE SURE TO VISIT the official FIRST OF MAY posting and listen to the lovely sounds of loving outside at Coulton's website.

Courtesy: shadixpn, for the love
Posted by hodg-man at 1:59 PM 1 comment: