WHEN I OBSERVED THIS OMINOUS PREDICTION in London's weather report this morning, and then it quickly disappeared, I presumed it was an error.

MY SYMPATHIES for those grounded by FREEZING FOG in Britain's airports.

BUT THE UPSIDE IS it seems to be transforming the country into a series of illustrations for the covers of paperback fantasy novels.

OH, AND OF COURSE: KNITTERERS

hodgman solus.JPG
Originally uploaded by captain joy.
Here's to you.

It is time
Originally uploaded by halcyonsnow.
THIS IS CLEARLY a manipulated image, yet I defer to halcyon's good intentions, as

I AGREE with Time's assessment of person-hood of the year, since indeed I have learned firsthand this year, via hobo artists and podcasters and many more, that the true and exciting engine of culture right now is self-built, funded, and powered by millions of busy hands and mice out there in the previously invisible world.

YOU whom I must thank for this astonishing strange and happy year.

THANK YOU readers, listeners, hoboers, wikiers, flickrers, bloggerers, boingers, casters, tubers, chalkers, and Canadians all, for all the joy and inspiration and brandy you have provided.

I AM VERY GRATEFUL.

PLEASE DON'T FORGET to download the audiobook for free from iTunes in the USA (see below), and meanwhile,

IMG_4374
Originally uploaded by rheimbro.
IT IS TRUE, you are all out of luck.

THE AUDIO EDITION OF MY BOOK is available for free only through the iTunes USA store.

THIS IS NOT DONE OUT OF SPITE

(except perhaps in the case of Canada)

BUT BECAUSE YOU LIVE IN SOVEREIGN NATIONS, some of which currently offer no legal edition of my book to begin with--IN ANY FORMAT.

and ONE OF WHICH (Canada) persists in having its own laws, economy, and publishing territories despite OUR OBVIOUS KINSHIP AND MUTUAL LOVE OF FRIES WITH GRAVY

I'm sorry if you feel vexed or disappointed.

I can offer you at least this: a recorded interview from BOOK SOUP (10/9/06) that I just rediscovered on-line. Tune in HERE AND AROUND THE WORLD as Leila asks some very provocative questions about my early schooling and the odor of my fellow students. 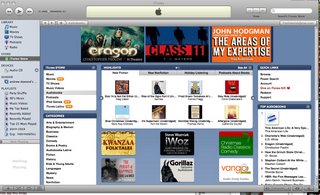 I HAVE BEEN ALERTED VIA OVERSEAS E-MAIL THIS MORNING that

the AUDIO EDITION of my book of COMPLETE WORLD KNOWLEDGE

IF YOU HAVE NOT HEARD THIS IMPORTANT 1,000 CD SET, which includes...

contributions by JONATHAN COULTON, MS. ROBIN GOLDWASSER, and A MYSTERIOUS CELEBRITY OF STAGE AND SCREEN,

Logic demands that you comply.

borelli.jpg
Originally uploaded by herman melville.
Is at Comix tonight.

ANOTHER HOBO FILM FROM APE-LAD

JoCo at Johnny D's
Originally uploaded by jcoulton.
FIRST, please do not forget about old COULTON TONIGHT at Mo Pitkin's with Paul and Storm.

SECOND, I am told that Patrick Borelli will be joining the stage as part of Catie Lazarus's FRESH MEAT next Tuesday (Dec 19). I have yet to see Catie's show, but I have been to Comix and I can tell you this: it is very new and shiny and clean. It is like seeing comedy on a HOLODECK!

TRIVIA FACT: Patrick Borelli likes tuna salad sandwiches for lunch, ESPECIALLY IF HE DOESN'T HAVE TO PAY FOR THEM.

ONE THOUSAND SIX HUNDRED EIGHTEENTH, the PO informs me that my account for the PO BOX ADDRESS listed in my book has expired. I am going to renew it tomorrow, but I am sorry if anyone had their mail returned.

For the doubters, IT WAS ALWAYS A LEGITIMATE ADDRESS, and it will be again, unless you are sending poison.

JoCo at Johnny D's
Originally uploaded by jcoulton.
APPARENTLY he destroyed all monsters last night in Somerville, where a sub shop graces every hill.

IS IT TOO LATE to license "The Sound of Young America Holiday Special" for your stations?

MEANWHILE, in the world of commercial radio, Andy has made my appearance on WGN's Nick Digilio show available here.

JUST WHEN I THOUGHT I WOULD NEVER AGAIN HAVE TO FACE POKEMON-INDUCED BRAIN EXPLOSION....

MEANWHILE, please listen to THE UNTITLED THORN/MORRIS PROJECT for hasty, blindfolded judgments and the eventual return of HANG IT UP/KEEP IT UP.

IF YOU GO TO HIS SITE, 43Folders you will see a heartbreaking, hopeful post from a brief time when the fate of James Kim was still uncertain. I did not know Kim, but I am realizing I know, at least obliquely, many who did. I find his and his family's story almost unbearably sad, and now doubly so, so I will leave it at that.

TONIGHT is Laura Cantrell at Mo Pitkin's. I will not be there, but you should go if you can. Wear a scarf.

H in Sideways
Originally uploaded by Ape Lad.
If you did not catch it in the coments, APE LAD JUST EXPLODED MY BRAIN, both with his Keaton-knowlegde, and with his bizarre cinematic find.

"While I can't confirm the authenticity of the good captain's find (although I suspect it is real), I came across something interesting. I had recently seen that very episode of Arrested Development as well as Steamboat Bill, Jr, the source of the original stunt to which the homage is being paid.

"While I appreciated the allusion (even down to the characters names: Buster Keaton/Buster Bluth. It's like they wrote the whole show just to make that clever reference), something was left unsettled in the back of my mind.

"Upon a repeated viewing of SB,Jr, I realized what it was: Buster Keaton performs the stunt with his back to the falling facade. It may seem subtle, but that is the difference between Keaton and Tony Hale and anyone else who seeks to emulate him. In my opinion anyway.

"Also, I stumbled upon this incredibly shocking (sorry) frame of film. Although it is obviously manipulated, it was not done by me. This can be attested to by downloading (free and legal) and viewing Steamboat Bill, Jr from here and paying close attention to 1:02:03."

I REMAIN SKEPTICAL, because I know that even in color films, Buster Keaton was in black and white.

BUT I CHOOSE TO TRUST JOY, as I am a fool.

Coulton will be on Soundcheck, WNYC's fine talk show about music, today at 2PM Eastern.

I HOPE everyone that I met during my recent visit to Columbus will take advantage of this rare opportunity.

THIS MEANS YOU skinny guy who followed us across the street,

AND YOU, OSU STUDENT whose cell phone I helped reprogrammed so John Oliver could leave your new outgoing message,

You will enjoy this show NOT LEAST because it is Coulton's birthday.