SINCE I HAVE NOT BEEN RULING THE WEB LATELY

I RECOMMEND that you visit someone who does.

MARK FRAUENFELDER, as all nine of you likely know, is the reason the entire, surprising, deranged, and beautiful E-HOBO project began.

HE IS A FRIEND, and a kind of visionary, and I say that even though I do not believe he has blood in his veins but PURE CURIOSITY.

"THEY SHOWED UP, BUT THEY WERE DISQUALIFIED FROM SERVING DUE TO BEING NONHUMAN."

FROM THE COMMENTS, MORE INFORMATION on the mysterious WALTER.

NOTE ALSO THE PHOTO, as that is indeed the room where I served. This article states that it is but a temporary exile for Walter while his true domain at 100 Centre St. is being renovated.

AND YET THIS ARTICLE APPEARED IN 2004.

IMAGE COURTESY: Elizabeth Robert and "The Villager"
Posted by hodg-man at 7:36 AM 12 comments:

THE MAN'S NAME WAS WALTER

AS I WAS ESCAPING jury duty yesterday, I learned that the white-haired, sharp-tongued jury clerk quoted throughout this blog was, and is, named Walter.

IF YOU MEET HIM, do not cross him.

OUR WHITE HAIRED LEADER IS BACK and looks forward to seeing us again in four years.

Back to my regular every-four-years blogging schedule.

NOT EVEN THE VOIRE DIRE...

BACK IN THE JURY ROOM NOW. Our white-haired leader is gone, replaced by a Charles Durning impersonator calling out names for the new panel.

WHILE ADMIRABLY GRUFF in his own way, his mic skills are very poor. Popping Ps all over the place.

BUT MY NAME HAS NO P, and it was not called. I await my fate.

I'M GLAD I'M NOT ON THIS JURY

COURTESY jt and Amanda for the link.

I HAVE BEEN EMPANELED

...BUT NOT YET selected for a jury.

I do not know if I will see our white-haired friend again.

I'M SURE HE SAYS THAT TO ALL THE JURORS

THE LATEST UP DATE FROM THE JURY POOL CLERK, A TALL SKINNY MAN WITH A MOP OF SNOWY WHITE HAIR:

"We're still waiting to hear from the expediters as to whether there is any COURT ACTION coming up. In the meantime you're still doing great. The chief court reporter, who's been here for 25 years, just walked through and said this is the most alert group of jurors he's ever seen. so you should all be very proud of yourselves."

I have capitalized the words COURT ACTION, for that is how he pronounces them. As in...

"OK. Everyone just stay patient. I'll let you know when you might get to see some COURT ACTION."

"Stand by for COURT ACTION."

Meanwhile, I just want to say that I thought SURF'S UP was actually pretty great.

STANDING BY FOR COURT ACTION
THAT IS ALL.
Posted by hodg-man at 10:41 AM 8 comments:

THE GREATEST PRIVILIEGE OF CITIZENSHIP

I will update as possible/necessary.

"The word we have now is that there are still two cases going through pre-trial hearings. It's not clear at that time whether they are going to be taking any jurors today, or whether you can go home. So it tight. It's really good to remember as you wait here that you are the only thing standing right now between civilization and anarchy. So, thank you. You're doing a great job."

ALSO, from the comments SEAN notes the following re: THE JUROR's ORIENTATION FILM:

The orientation film is called "Your Turn" and is available online here."

AND APPARENTLY he said this at exactly.

A CORRECTION, AND A FURTHER OBSERVATION

CORRECTION: The drowning in the jury orientation film is a witch ACQUITTAL. If the person in question had indeed been a witch, she would have floated. MY APOLOGIES.

I AM ON JURY DUTY TODAY

HOWEVER, the city of NY provides wireless to public servants.

SO FAR, I have not been sequestered, and so I trust it is not illegal to pass along these OBSERVATIONS

1) They are still showing the "trial by ordeal film" they were showing 5 years ago, including the MOCK WITCH EXECUTION.

2) The floors are very shiny.

Meanwhile, I hope very much you will go support MCSWEENEY'S.

Double meanwhile, if anyone lives near Montana, perhaps you can verify this curious electronic mail I received and APOLOGIZE on my behalf, for as some of your have already learned the hard way, I REGRET I DO NOT CREATE HOBO NICKNAMES ON COMMISSION.

My coworkers and I at the Bozeman dairy queen have developed a hopeless addiction to your audio book it started 3 months ago when we first used it to quench the griping boredom of working at a summer Ice cream place in the cold parts of winter. We now listen to it on almost every shift. (It sounds weird but true). We are most taken with the 700 hobo names in all we have listed to it at lest 20 times strait throw, Many times back to back. Well all this long explanation has lead up to the question
Can you create 3 hobo names for me and my 2 coworkers?
If yes please tell us the information you will need to craft these names.

If you go there and meet Steven, please have a Blizzard on me. Send me the receipt care of the PO Box in my book--be sure to have Steven sign it--and I will reimburse you.

THAT IS ALL, FOR NOW 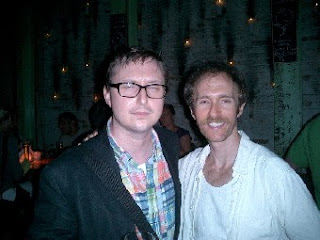 EVERYONE KNOWS that I endorse STEIN in the good fight to become the next GLAMOUR MAGAZINE "Jake."

YOU MAY VOTE NOW, IF YOU WISH.

And NEVER FORGET his other, non-GLAMOUR project, THE PETERSONS. ("Matt Saldivar" is the rave.)

COURTESY: Krucoff for the finest photo.
Posted by hodg-man at 8:44 AM 7 comments:

ONCE AGAIN, TELEVISION DIVIDES US

INDEED, Lindsay cites Ryan "Rambling" Rhodes's comment that "...if you've ever grappled, you'd know it's about as 'homoerotic' as getting hit in the face with a rake and is, in fact, exhausting, fierce and competitive combat."

THE GRAPPLING SPORTS have a long history, and "THE GROUND GAME," as it's called, is indeed a kind of mental and phsyical chess.

(Or at least, I know this from my research. Ryan is correct in presuming my own fisticuff history is limited: I was ONCE ELBOWED IN THE CHEST on the subway, and then I GRABBED THAT GUY'S NECK once in college.)

HOWEVER, I want to clarify that the footage was not shown in slo-mo for comedic effect. Nor did I or the staff of television have to search hard for these examples.

Indeed, if you watch MMA (and I have done, and I enjoyed it, and I will do so again), this is where pretty much every bout ends up: GUYS ROLLING AROUND ON THE FLOOR.

I CERTAINLY DO NOT MEAN THESE FIGHTERS OR THEIR CRAFT ANY DISRESPECT, and not just because I do not want them to break my forehead in half.

Some of the fighters I watched were incredibly skilled, and Karo "The Heat" Parisyan in particular KICKS ASS.

Some of them, though, seemed to be merely artless brawlers ROLLING AROUND ON THE FLOOR HALF NAKED.

EITHER WAY, IT WOULD BE A VIOLATION OF COMEDY if I were to avoid pointing out just how prevalent this aspect of the sport is, and how it would look to a space alien, or a non-fighter, or even, I daresay, to a portion of the MMA audience who do not know about the long history of the grappling arts: THE FIGHTERS SOMETIMES LOOK LIKE THEY ARE LOVING EACH OTHER.

WHAT DOES THAT MEAN? Nothing, I suspect, that Ryan does not already know.

FIGHTING IS INTIMATE. I know that just from grabbing a guy's neck.** You're up close, often closer than you are when actually having sex with someone. In real life, it's scary and exhilirating and awful all at once. In a sporting situation, I can see how that potent mix of violence and bonding can also be joyful and awesome.

At the end of one of the bouts I watched CHRIS "THE CRIPPLER" LEBEN, still electric-eyed with excitement even though he lost, kiss his opponent in congratulations on the cheek. He didn't do it because some comedy writer told him to do it so he could write a joke about it later.

He did it spontaneously, genuinely, BECAUSE THERE IS A NATURAL, AUTHENTIC, AWESOME INTIMACY TO KICKING ASS--and competition in general--and that's part of its appeal.

THAT SAID, RYAN AND I CAN AGREE ON ONE FACT: I am a pasty, doughy gonad.

*Albeit, I realize now, one that relies on the ludicrous fallacy that "homo-erotic" is a synonym for "sissified."

PLEASE SEE CORRECTION BELOW: not Glenn, but LEN.

How I Did It
Originally uploaded by jawboneradio.
HERE IS LEN, aka "JAWBONE's" take on COULTON'S REVEALING AUTOBIOGRAPHY.