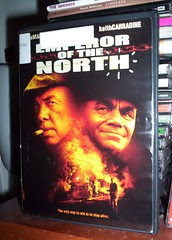 Edible bouquet stores are all over Los Angeles. I feel like maybe I should support them, given that it is kind of New Sincerity to make a bouquet out of something that is totally unsuited to the task... but I feel so strongly that these stores are a sign of the downfall of civilization.

Todd Barry has a joke where he says that The Body Shop should be called, "Thoughtless Gift Warehouse."

To me, the edible bouqet is like that, plus pretense. Like someone is rubbing it in your face the absurd lengths to which they went to get a meaningless gift.

Here in Colorado we too are seeing a decline in movie rental stores due to the increase of usage of Netflix. I've seen some of my favorite stores that stocked hard to find films.

I really feel your pain John. It sucks when places you love go under.

opps..what I meant was I've seen some of my favorite stores that stocked hard to find films go under. (I thought it, but my fingers forgot to type it..)

jk said...
This comment has been removed by a blog administrator.
9:04 AM

Hi John, I share your grief. I suspect we'll get another Duane Reade or something even more useful like another Rite Aid ("with us, it's personal").

Sunday evening owner Gary is having a party (wake?) at the store ...

A car rental company in Australia also runs almost entirely on index cards: a grid of them, wall mounted with chunky bulldog clips hung on nails.

I've never once been held up whilst someone waits for a computer. Everything is always ready, waiting on a hook. The computing happens behind the scenes after you leave. It's beautiful.

david rakoff (whom i saw in brookline--what a happy synchronicity) said that he'll never regret becoming a us citizen, as it married him to new york city, the love of his life, but he added that his relationship with the city has shown him more than any other relationship exactly how much compromise and acceptance goes into making a marriage work. his analogy was sort of, you know, imagine you fall in love with this really amazing guy, and he's so much cooler and funkier and more exciting than anyone you've ever known, and you can't believe how lucky you are to be able to hang out with him every day. and then one day he comes home and tells you he got a manicure, and you don't know what to think about that, but you let it slide. and then you notice that he's taken to ironing his shirts, but you let that go, too. but one night he comes home and says, "hey, come look at this great book i picked up today. it's all about wine," and you think, "oh, crap. he's a wine person." and that's what's happening to new york--it's turning into a wine person. or maybe more accurately a wine and fruit (bouquet) person who hates independent businesses and cult films. saddening, indeed.