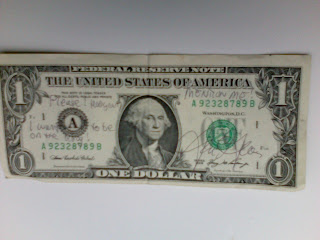 IRA GLASS paid me a dollar to mention me on his blog.

THE EVIDENCE IS HERE:

HONESTLY, I like and admire Ira so much, I probably would have done it for 60 cents.

STILL, this particular dollar makes for a nice keepsake. I think I will give it away as a prize of some at one of my book readings next week.

ON THAT SUBJECT, WERE YOU AWARE THAT I WILL BE APPEARING...

AT Barnes and Noble, Union Square, of Manhattan, Tues Oct 21, at 7PM, WITH Jonathan Coulton

AT the Coolidge Corner Theater, Brookline, of Massachusetts, Wed Oct 22, at 7PM, WITH Jonathan Coulton.

AT Politics and Prose, Washington, of District of Columbia, Thurs Oct 23, at 7PM, WITHOUT Jonathan Coulton, who will be going to England for a spell.

AT the 215 Festival of Philadelphia, PA, specifically THE LATVIAN SOCIETY, Friday Oct 24, at 9PM, WITHOUT Coulton, but WITH David Rees and Patrick Borelli.

All of this is true.

STAND BY for more true details re:

ANN ARBOR!
The fictional city of CHICAGO!
and the across-the-pond return of COULTON for
SEATTLE!
PORTLAND!
SAN FRANCISCO!
and
LOS ANGELES!

PLUS (though without Coulton):
ATLANTA!
OXFORD!
THE APPLE STORE OF SOHO WITH ELIZABETH GILBERT!

ALSO, there will be some changes to this website.

When are you coming to San Francisco?!?

We must truly be in the End of Days if the Coolidge Corner Theater, den of iniquity and purveyor of late night softcore pornography remains open, while the Circle Cinema closes its doors after 40 years of wholesome moviegoing. I fear for the children (especially the ones who have to ride the T to Chestnut Hill to see movies now).

I'll pay you $1.60 not to write another post unless it has the sentence, "..and I'll also be appearing at Book People in Austin."

I'll then save my $4.40 in change to buy you ice cream across the street.

I'll bring the good liquor to Oxford, this time.

San Diego is also a city in California.

Glass offered me a priceless two dollar bill to write about him on my blog, but I refused. I'M NOT FOR SALE.

Burlington, VT. After all it's the East Coast version of that mythical Chicago place.

Your unbiased sincerity of posts about This American Life may never again be trusted, now that we know you are personally compensated by NPR lobbyist Ira Glass.

I look forward to seeing your reading at Union Square on Tuesday. Look for me; I wear [Ira] glasses now.

No one ever comes to San Diego. WE ARE THE SECOND LARGEST CITY IN CALIFORNIA! We are so lonesome down here.

I will add another $1.60, plus a round of adult beverages at the Hyatt, if you have or can schedule a layover at Dallas/Ft. Worth International Airport.

I, too, will vouch for San Diego's existence in California. We are a real city!

In fact, should you come to San Diego, I will bake you real cookies in the flavor of your choosing*!

*my husband hopes you choose chocolate chip so that he can steal some.

How many copies do I need to guarantee to bring you to Winnipeg? (Manitoba) ((CANADA))(((North America)))?!?
It is, after all, a city (not a town) where Marshall McLuhan, Neil Young and Douglas Rain (Voice of HAL in 2001) all attended the same High School. Also the birthplace of the man called Intrepid, Monty Hall and David Steinberg, the Weakerthans and Marcel Dzama TO NAME A FEW. Indisputable proof that it is the epicentre of network of global ley-lines of creative freakitude. (Take that, Regina!)
And it is full of the kinds of hipsters what moves to what Hodgman grooves, baby.

Looking forward to your as-yet-to-be-determined Los Angeles appearance. Hoping that Coulton will be in tow.

If you come within driving distance of Ontario, Canada (ie. upstate New York, Michigan, Ontario) I will bring you a loonie & toonie, as well as maple syrup, and 5 beaver pelts, the latter of which can be used to barter Canadian shops for goods and services, assuming of course YOU COME TO CANADA.

So glad to see that your travels will take you out of the liberal, elite, ivy league confines of the Northeast. Though most Southerners will tell you that Atlanta is often referred to as "The San Francisco of the South." While you are galavanting across the nation, I hope that you find time to visit Texas. I have heard it called "God's Country," but I have seen mugs in many other states that offer a different opinion.

Sir: I was not previously aware that you would be appearing at these many fine venues. Further, I most eagerly await the additional true details of your visit to Portland, which is quite near to my own, not at all fictional, but much smaller city of Corvallis.

I have two questions for you. Are YOU aware of the great many students and other people from the Pacific Northwest who might like to attend your appearance? Also, how will you accommodate these great numbers, who, were they not college students and people from the Pacific Northwest, after being beguiled by the musical stylings of COULTON and your own monotonal allocution, would no doubt wish to purchase copies of your fine new book?

If you return to Austin I will gladly drive up there from San Antonio (again) to attend. Also, I will cheerfully underwrite the cost of a second scoop of ice cream as a humble gesture to show that you are cherished beyond measure.

I can barely wait for your arrival in our Brigadoon-esque city of sports-playing bears, lantern-kicking cows, and Gothamy backdrops, sir.

I was aware of it...and I'll see YOU in Union Square!

Indianapolis is a frequently overlooked city. Please do not fear UniGov's influence. The Thought Leaders of Indianapolis are benevolent and rarely murder. You would be allowed to come here to support your book, but it would undoubtedly be censored and/or burned.

Where pray tell is this so called "Ira Glass Blog". I have been spelunking the tubes for what seems like minutes and can find nary a trace of said blog.

Please provide us with a link to this paid appearance on other parts of the net.

I hail from the fictional city of Chicago, and can't wait to see you at THE SECOND CITY on La Salle Street, October 28th at 7PM.

I do believe you promised BU TONIGHT another interview (not that we do not love the first one) when you are back in town. Don't think we forgot it! I hope we can look forward to seeing you Oct. 22 when you're here in Boston. (You can get in touch with us at butonight (at) gmail (dot) com by the way, and I'll be trying to get a hold of your "people").

hodg-man said...
This comment has been removed by the author.
11:55 AM

could you please come to minneapolis?

you know, which ever of the twin cities you prefer. although it's bad to have a favorite. the other one gets a complex about it.

If you come to Grand Rapids, I will buy you dinner at the local Ethiopian restaurant. It's my favorite place to feel cultured (and the food is actually good.)