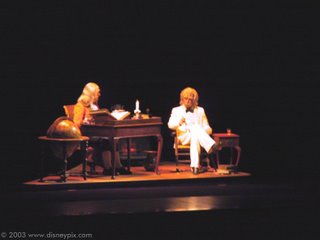 But the 1,000 you have already purchased will suffice.

HERE IS THE MYSTERY IMAGE. It is a picture of a robot Mark Twain talking to a robot Benjamin Franklin.

CONTRARY TO POPULAR BELIEF, the actual corpses of Twain and Franklin were not made into robots for this popular exhibit in Florida.

WHICH IS TO SAY rumors of the robotic reanimation of Twain's corpse have been highly exaggerated.

See you tonight. And/or tomorrow night in Brookline.
Posted by hodg-man at 12:34 PM

How many Bothans died to bring you this information?

Askinstoo said...
This comment has been removed by a blog administrator.
1:59 PM

She made over $900 having fun and being a spammer. Sweetness.

Possible reasons why the Spam Museum is located in Minnesota:

1. Minnesota is the place Hawaiians go on vacation
2. Spam spelled backwards is Maps and obviously you need one in Minnesota
3. People got bored at the Mall of America
4. Austin, Minnesota is where George Hormel first tasted imitation pork
5. Spam originated on a stick at the Minnesota state fair, before it was put in a can
6. All food staples originated in Minnesota, including Snickers, Bisquick, Jolly Green Giant Veggies, Wheaties, rice cakes and of course Spam.

Well, I figure any one of those would work, or if you are really curious next time you are in Minnesota visit the Spam Museum, home to Hormel’s canned meat industry.

you mean i bought those last five copies for nothing? curse those scurrilous cads at the penguin group! they've deceived me for the last time!

i made a tiny clay replica of mark twain for a fifth-grade english project, precisely because his corpse was unavailable. if i could have gotten my hands on it, though, those rumors would be right on the money.